In order to create the new monster, I held three medals in my hand and began the [Synthesis].

Around me were Kuina, Rorono, Aura, and Ruhe who were eagerly waiting for the birth of the new S rank monster.

The medals I held were [Beast], [Time], and [Creation]. Upon the start of the process, the medals became particles of light which intertwined together within my closed fist.

During that, countless possibilities of what the monster might become flowed to my mind. After some searching, I found and selected the possibility that I wanted. And that was a hound that persistently hunted its prey across time and space.

The versatility of the [Beast] medal was truly extraordinary.

All sorts of monsters could be created with it. Unfortunately, due to the default nature of Synthesis which was being random, that versatility also meant a lower chance for the desired monster to be the result. But then again, that wasn’t an issue at all with the [Creation] medal since the user could simply choose whichever outcome.

Speaking of the [Creation] medal, the one I made it transform into was the [Subspace] medal. As its name might imply, it was a medal that specialized on the other dimension. Needless to say, its compatibility with the [Time] medal was spectacular.

After saying so, the intertwining of the particles of light grew more intense. Choosing not to endure the heat caused by that anymore, I opened my closed fist.

The particles of light then, while shining brighter and brighter by the moment, gathered in one place and formed a figure.

At that moment, I was given a choice and I chose for the new monster to be able to level up as opposed to having a static level. Although the monster would start at level 1, being able to level up allowed it to eventually achieve a higher level than the other choice.

The choice made, features of the monsters began to show as the intensity of the light decreased.

Before long, I felt the overwhelming presence peculiar to S rank monsters.

It’s born. Without a doubt, it’s the monster I’m wishing for.

I subconsciously smiled as I thought so.

“It seems strong. And quite fiendish.”

“It’s master, so I thought for sure it’d be a new little sister.”

“Ooh, it feels quite strong. It’s reassuring to know that I will now be fighting with this child.”

Each of my monsters expressed their impressions of the newly born one.

The new monster was a gigantic dog. It was so big, a fully-grown human male might seem like a child next to it. Its coat was beautiful and jet-black. It also had a thick, zigzaggy, pointy tongue that was stretched outward.

It was Tindalos, the hound that persistently hunted its prey across time and space.

Tindalos growled so. It seemed quite the energetic child.

“Nice to meet you. I am to be your master, [Creation] Demon Lord Procell. I’ll be relying on you from now on.”

I said so and then extended my hand. In response, Tindalos extended its paw too and shook mine. It’s quite intelligent. 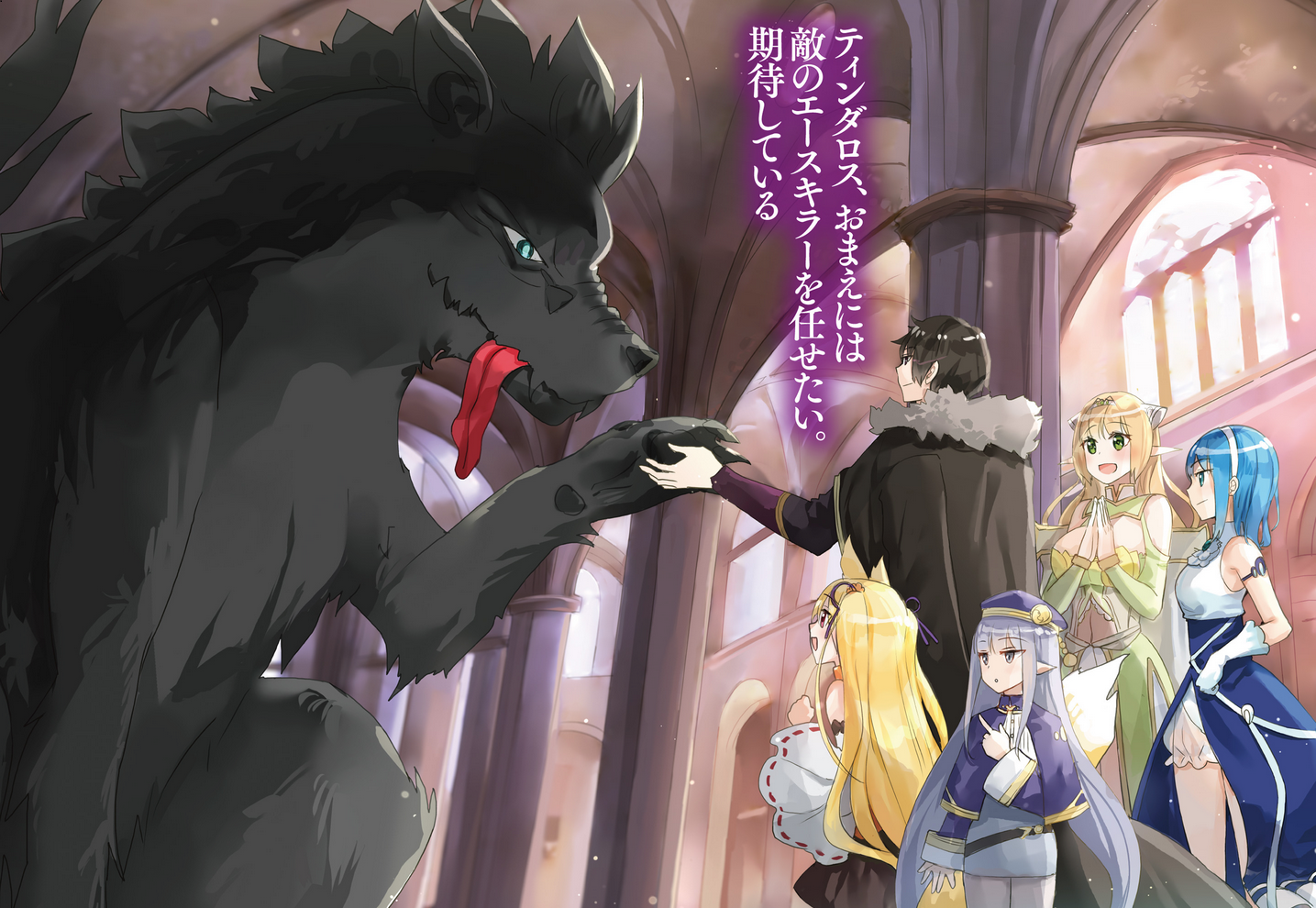 “Well, for you girls to serve as leaders of Avalon, I needed you to be intelligent and be able to communicate, hence why I used [Person] when I made you. On the other hand, all I seek from this child is for it to be powerful in a fight.”

In addition, since neither [Time] nor [Beast] by themselves could make a monster capable of crossing to the other dimension, that duty fell to my [Creation] medal. In other words, there just wasn’t enough leeway for a [Person] or similar medal.

“By the way, master, this child is a girl. And is actually just a pup.”

“…but it’s already this big”

I was surprised by Rorono’s comments.

Tindalos was already much bigger than I was, yet she was saying it could still grow.

“I was surprised a doggy was born, but it seems like a good kid. I don’t know how, but I just know that it is.”

“Leave this girl to me, patron. We will be fighting together often from now on, after all.”

Aura and Ruhe both seemed pleased with Tindalos. It would be great if they grew attached to it.

After that, I thought I, as its Demon Lord, needed to confirm its capabilities. When I used my Demon Lord Powers to took a look at its stats, I was in disbelief at how great it was.

One who lurks in the angles

It had very offense-focused stats. The agility of S+ made it the quickest among my monsters, beating even Kuina and Aura on that regard.

Its skills were just as amazing.

In other words, so long as there were acute angles, Tindalos could appear from whichever one, attack, and then retreat, all in a very short span of time.

Supreme Hunter: Activated by selecting a target through sight. The target’s stats are all lowered by a rank, with magic and physical strength being lowered (slightly) even further. Also allows the skill user to detect the whereabouts of the target even if the target is using concealment skills of any kind or is in the other dimension.

Even though the skill’s activation condition of simply seeing the enemy was extremely easy to fulfill, its effects of debilitating the enemy and tracking them down—while they were still weakened—were a big help. When used with [One who lurks in the angles], Tindalos could hunt its prey pretty much wherever they were.

Guardian of Time: Allows the skill holder to control their own flow of time or that of a target selected via sight. Magic power consumption is proportional to the multiplier used. The greatest multiplier that can be used is 3.

This skill was simple, but undeniably strong. It practically gave a significant speed boost.

From these skills, I could tell that Tindalos was more or less a monster that specialized in one-on-one fights. However, as great as its skills were for one-on-one duels, they didn’t give much of an edge when facing many enemies at once.

That wasn’t its only weakness though. Each of [Supreme Hunter], [Transfer], and [Guardian of Time] consumed a great deal of magic power. This was despite the fact that Tindalos’s Magic stat was only a B. In other words, if it wasn’t careful, it might run out of gas before the fighting was over.

“Tindalos, I’ll be counting on you. Specifically, when taking down the enemy’s aces.”

The basic plan was to leave the small fries to my other monsters while Tindalos launches a surprise attack on the enemy’s trump cards.

That’s all well and good, but something’s bothering me.

It concerned Tindalos’s last skill: Human Transformation. None of the medals used should have given Tindalos this skill, and yet Tindalos nonetheless had it. Which begged the question: how did it get the skill?

Surely, Marcho can shed some light on the matter. I should talk to her soon.

While thinking so, I petted Tindalos’s head.

I had petted Kuina and the others’ head so much, I was confident in my abilities, and as it would seem, it worked on Tindalos as well.

It was a gigantic dog, but it behaving this way made it look oh so cute.

It showed me its belly, so I proceeded to brush it too. When I did so, it seemed even more pleased. Hahaha, what an adorable fellow.

Going with the flow, I proceeded to pet it more. In reaction, it leaned on me while shaking its tail, which unfortunately caused me to lose my balance.

Pinned and my back on the ground, I was licked in the face by a very enthusiastic Tindalos.

I can get used to this. Contact with an animal might just be what I have been lacking. I mean, the girls are cute and all, but they were still girls, so I have to be discreet. With a dog though, I can just let go and be comforted by all this cuteness.

Right when I thought so, Tindalos’s body shone brightly. Moments after, her form became that of a cute but expressionless girl with black hair and dog ears.

In that form, Tindalos continued the licking she was doing earlier.

If it was a dog licking me, there would be nothing wrong—nothing criminal—whatsoever with this scene. And that was all Tindalos was: a dog in human form. Unlike Kuina and Fel who were more demi-human in nature, there was no way Tindalos would feel shame from such an act. For it, it was just being playful.

And then, at that moment, I felt the signs of a Transfer. Are you kidding me? Right now?!

“Yoohoo, Procell, I’m here! You said I can visit anytime, right? Well, I can’t any longer so I came as soon as possible. I brought some presents.”

While saying so, Marcho opened the door.

Her dungeon and mine were connected by a pair of Transfer arrays and the one that led to Avalon was hidden here in my estate. To be more specific, it was hidden in the room adjacent to the research room where I currently was. In other words, I didn’t have enough time to remove Tindalos away from me.

And so, Marcho saw the situation I was in: pinned to the ground and being licked in face by a naked girl of 10 or so years of age.

A smile was still on her face, but her eyes rapidly grew cold.

Although the misunderstanding has been cleared, I had a bad feeling I would still be referred to as Pedocell for quite a while.

By the way, Kuina had been spouting things like Tiro-chan’s so sly! Kuina too! If an animal’s fine, Kuina’ll become a fox!

Aura was teasing Kuina on while Rorono made a face that seemed to approve.

Things were getting out of hand.

Meanwhile, the cause of it all, Tindalos, was back in her hound form and was grooming herself.

At any rate, I had made a powerful monster.

There various of ways I could think of to utilize her powers. For example, making sure that the [Black] Demon Lord would never again be able to escape.

Edit: It’s still Human Transformation B even the light novel, which I always assume have gone through more editing.

Please consider supporting me. You can do this either by turning off adblock for this blog or via my Patreon page. Thank you.

86 thoughts on “Chapter 1: The Hound that persistently hunts its prey across space-time”