Finally, it was the day before the [Evening Party] wherein Demon Lords would gather.

Almost a month had passed since Elder Dwarf joined us. During that time we had managed to: mass produce Golems, develop weapons, build up a reserve of metals from the mine, and level up. We had been extremely busy.

Elder Dwarf, Tenko, and I all went into the [Crimson Cavern] while the Golems and Skeletons were assigned to do nothing but mine.

I had a new [Creation] medal in hand. A month had already passed since the last one so I was able to make another.

However, due to the restriction on [Creation], there was nothing I could do with it unless I had an original medal made by another Demon Lord.

“As per Master’s instruction, I made as much as I could every day.”

In the backside of the house reserved for us, the Golems were placed.

They were balanced like so. No matter how much Mithril we had to make powerful weapons, it wouldn’t be enough for making all the Golems so most of the Golems were instead made of iron and silver. Thus, the Iron Golems and Silver Golems.

“These will make things easier. I’ll equip these guys with heavy weapons and then they’ll be a great addition to my fighting force.”

The Golems had a large build, towering at over 3 meters, and it had the power to match. So, I equipped them with heavy weapons remodeled according to their specifications and done by the Elder Dwarf.

Rate of fire: 650 rounds per minute

A historical masterpiece of a machine gun. Eighty years had passed since it was designed and yet it still was one of the most excellent guns. It boasted overwhelming firepower and reliability.

It weighed close to 40 Kg. so I was only able to just barely make it after I had leveled up and increased my MP.

I was only able to do so recently so there was only five of the gun as of yet.

The power it possessed was beyond words. Not only would a bullet go right through and leave a hole to any human shot with it, it would turn them into minced meat.

Just imagine these bullets of such ludicrous power was incessantly raining down upon the battlefield.

Originally, the gun was meant to be installed on a vehicle and never was it meant to be carried by foot soldiers. However, the Golems were able to easily make use of such a beast.

“Master. These Golems will be suited for a defensive battle but not an offensive one.”

However, that didn’t mean it didn’t have any weaknesses.

The Golems weren’t monsters created by me so I couldn’t store them away. In other words, the Golems would have to move until their destination point all by themselves. Their movement was by no means fast and that would therefore hinder their offensive. Their movement speed even loses to the Skeletons’.

However, in occasions where a location was to be defended, there was no monster more convenient than them.

“I know. These guys will be our strongest line of defense.”

I was thinking that basically, in my Dungeon, the ones in charge of attack would be the Undead corps while the Golem corps would be in charge of defense.

“Leaving all that aside… How’s Tenko’s weapon? Is it complete already?”

“It’s perfect, the best one I’ve made. I’ve finished it using: my analysis on the construction of the shotgun, the information Master gave me regarding the M&K MK417, my intuition as a dwarf, and Tenko’s demands. It’s my most superb prized item.”

The assault rifle I had prepared for Elder Dwarf was:

Rate of fire: 600 rounds per minute

However, the MK 417 and its 7.62 mm bullets would not be an issue for Elder Dwarf, all things considered.

I handed her the high-powered gun in hopes that she might acquire any engineering techniques from it and use it for enhancing Tenko’ shotgun.

“Oto-san, my new shotgun’s really amazing! It so powerful, and it can even rapid-fire; it’s the best! El-chan, thank you!”

Tenko who test fired the gun in a separate location had returned.

She was in a considerably good mood and hugged Elder Dwarf.

Her weapon underwent an extreme power up so of course she was delighted.

“Elder Dwarf. May you please tell me what kind of improvements you have made on the Remilton M870P?”

“Yes, Master. First, due to the properties of the Mithril alloy, the gun was made lightweight while also having an increase in its strength. The strength of the material aside, I have also fully applied dwarven enchantments on it.”

It looked as though dwarves used some kind of magic to enhance materials.

The Mithril used was no ordinary Mithril either. It was a Mithril alloy wherein the Mithril was mixed with various kinds of metal. It resulted in an increase of its strength and viscosity.

“Next, I increased the firepower by changing the shell from a 12 gauge to 4 gauge one. I have also mixed in Mithril powder to the shell’s powder. Mithril powders have the property to store magic power so if Tenko put in some of her magic power, the weapon’s power will further increase. A 4 gauge Mithril shell is about 5 times more powerful than an ordinary 12 gauge shell…… I’ve also added in a feature which will reduce the recoil but only so much that Tenko will be able to handle this beast.”

I was delighted to know that the power of the shells had skyrocketed.

However, not all of it was good news. The shells now employed magic power and I was therefore no longer able to make them using my [Creation].

But Elder dwarf had also made 4 gauge shells which used ordinary powder. These didn’t have any magic power flowing in them so I had them properly memorized so that I could make them using [Creation].

“In addition, using the MK417 as reference, I have implemented a semi-auto mechanism. It makes use of the recoil and loads in the next bullet. Also, it’s now possible to change magazines.”

The Remilton M870P was a pump-action shotgun. Each shell needed to be pumped-in but because of the semi-auto mechanism, the next bullet would now be reloaded into the chamber automatically.

In other words, rapid-fire was possible.

Furthermore, shells were loaded into a Remilton one at a time but thanks to the modifications done so that a magazine was detachable, the user was now able to replenish all the bullets in one go just by changing the magazine.

“It’s amazing. But, isn’t this a size bigger than before?”

“That can’t be helped. We increased the size of the bullet, made it use magazines, and added a semi-auto mechanism. All of which would lead to it getting bigger.”

“I guess. The handling of the gun suffers a tad but, all in all, great modding. You did great, Elder Dwarf.”

I stroked her head.

She might have had an unconcerned face but the edge of her mouth had risen ever so little.

In fact, this child was just as spoiled as Tenko; pleased whenever her head was stroked.

I was the praising type of Demon Lord so whenever there was a chance, I will assert myself by stroking their heads.

What’s amusing about this child was, although she usually referred to me as Master, she would occasionally call me father.Her face would then turn red and sometimes even lose her cool.

Some time ago, Marcho looked at the Demon Lord who was spoiling Tenko and Elder Dwarf, and uttered [Loli] Demon Lord but this was highly vexing. I just wanted nothing but to make the girls happy.

“Tomorrow will at last be the [Evening Party] wherein all the Demon Lords will gather. I’m glad that Tenko’s weapon is ready.”

Marcho had given me the advice that as much as possible and until the [Evening Party], I should prepare my fighting force.

Actually, I didn’t know anything more than that because it looked like that telling me what would happen on that night was against the rules.

“No matter what happens, Tenko will protect Oto-san!”

“I, too, shall protect Master. My research can’t move forward if Master was gone, after all.”

These two daughters of mine were really motivated.

If their weapons and superior special abilities were to be factored in, it could even be argued that they might be able to hold their own against an A rank monster.

“I’ll be relying on you. Also, we have to seriously think about our Dungeon soon. I plan to take your requests into consideration so please think what kind of Dungeon you think is good.”

“Oto-san is going to make his Dungeon?”

“Not yet but soon enough.”

“I’ll be looking forward to it!”

Tenko didn’t feel anxious, instead her eyes sparkled full of hope for the future.

“Master, a mine is essential. You absolutely have to buy one right from the start.”

A dwarf is a dwarf and so, she conveyed to me her foremost wish.

I looked at them and felt a little bit at ease.

I must have looked like a fool to be the only one feeling worried.

“Tenko, Elder Dwarf, we’ll show them our might tomorrow.”

“We’ll make them realize the power of my weapons.”

Today, we did maintenance on our weapons in preparation for tomorrow, and talked about the Dungeon I would eventually make. We were very excited.

The author, Tsukiyo Rui-sensei, wants to take this opportunity to promote the release of the first volume of her other work, お菓子職人の成り上がり～天才パティシエの領地経営～ (Upstart Pastry Chef ~The territory management of a Genius Pâtissier). It will launch on the 30th of October (although futabasha states it will be available on the 29th).

The synopsis say that it’s about a genius pastry chef reincarnated into a noble albeit of low nobility. And after some twists, becomes the ruling lord of an area. And so, he want to build up his territory while also fulfilling his previous life’s dream of becoming the best pastry chef.

So if you like sweets, check it out. Or in case you just want more foxgirls!

Let’s go check it out!

Also, while we’re at it, check out the other novels written by the author. Some are already in light novel format! 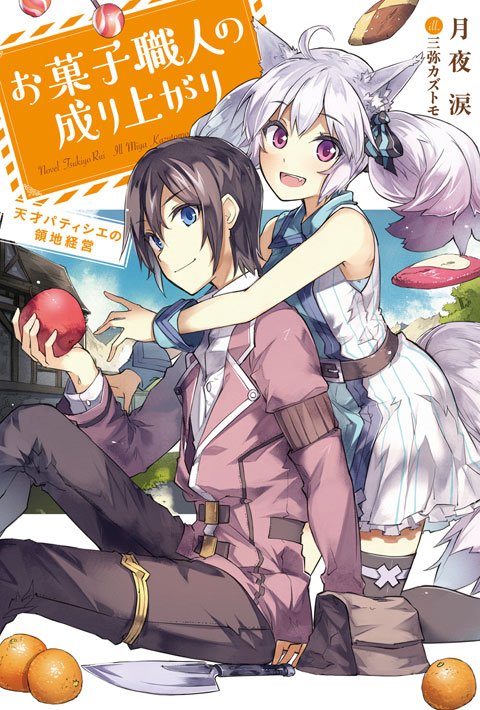